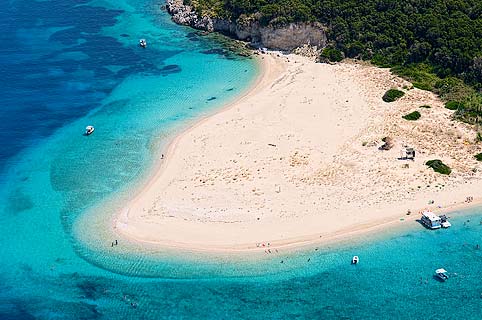 Zakynthos, a vision of beauty combines mountain and sea. An emerald in the azure waters of the Ionian Sea waiting to be explored by the visitor on beautifull beaches, lushly green mountains, incredible sights and the coexistence of the inhabitands and visitors with the renowned caretta caretta sea turtle.

Zakynthos, a vision full of beauty, sounds fading away into past and lingering fragrances, make one forget time and place.

A precious emerald dropped in the clear blue water of the Ionian Sea, waiting for those who know, to hold it in their hands and enjoy its beautiful sandy beaches, its heavenly sourroundings and its inhabitants' traditional hospitality.

The island is covered by a network of roads, particularly the flat eastern part, with main routes linking the capital with Volimes on north, Keri on the south, and peninsula Vassiliki on the west. The road between Volimes and Lithakia is the spine of the western half of the island.

The mild, Mediterranean climate and the plentiful winter rainfall endow the island with dense vegetation. The principal agricultural products are olive oil, currants, grapes and citrus fruit. The Zante currant is a small sweet seedless grape which is native to the island. Bay of Laganas is the site of the first National Marine Park and the prime nesting area for loggerhead sea turtles (Caretta caretta) in the Mediterranean. 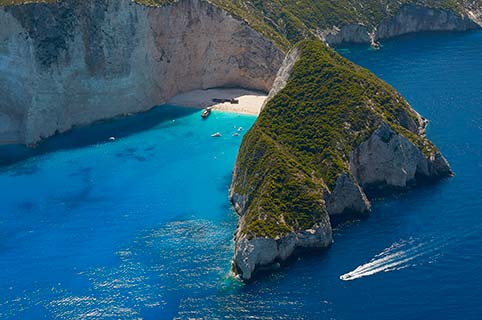 The most famous landmark of the island is the Navagio beach. It is a cove on the northwest shore, isolated by high cliffs and accessible only by boat. The beach and sea floor are made of white pebbles, and surrounded by turquoise waters. It is named after a shipwreck  which sunk on the shore around 1980.

Zante island has a long musical tradition. It was a precursor of opera and operetta in Greece and on the island it constituted links between nobles and the rest of the people. In 1815 it saw the establishment of the first Music School in Greece. 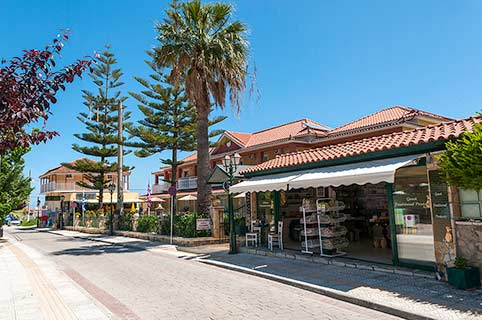 The "Tom & John" complex stands only 50 m. from the sea, 5 Km from the town of Zakynthos and 7 Km from the airport. "Tom & John" which was renovated a few months ago, is a place where one can feel the owners' hospitality based on their experience of 30 years!

The types of accommodation offered are :

2-space 45m2 apartments (4-5 persons) with two bedrooms facing the garden or the sea.

2-space 62m2 special apartments which can accommodate invalid people as well, with a sunny veranda facing the garden.

Just opposite the "Tom & John" complex, our private swimming pool, chlildrens pool and playground, table games and library are at your disposal.

Breakfast, lunch and dinner are served daily. Our staff are always ready to serve you by hailing a taxi or renting a car. We also offer a free tour round our hotel for you to become familiar with the surrounding public places. No reservations needed. 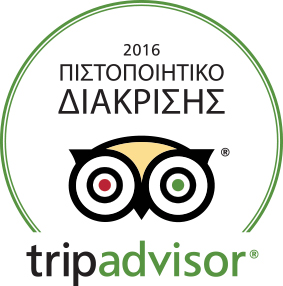